There are lots of options for new windows, even hurricane windows in Oakland Park, FL and when you start to look into things, you might feel like you can only afford certain things on your budget. You might be able to get quality windows, or you might be able to get the appearance you want. But affording both can be hard. When you get hurricane windows, though, you get both of those details, even if you just get standard windows. You might think that hurricane windows have to be larger and more clunky to be effective, but that’s not the case. They look just as good and sleek as any new window. It’s hard to tell them apart from other windows, in fact. You can rest assured that no matter what hurricane windows you get, you are getting quality and appearance.

As you look through the details, you are going to want to pay close attention to the large and small decisions you make to ensure both quality and appearance. Your window store professionals can help you with that. While hurricane windows are highly efficient, they can look different based on the choices you make. You get to pick the color, style, hardware, and everything else to make the windows fit into your home’s style and your preferences. You want a certain appearance and you can have it.

Hurricane windows are going to sell better if you sell your home in the future, but you will want their appearances to match their quality. Windows that don’t look as good could deter your curb appeal and turn people away and that’s the last thing you want. There are many things on hurricane window’s appearances that can’t be changed. Once they are installed, you are stuck with them for the long haul. Take your time in making the right decisions.

When you are looking at new windows, you always want to put the majority of your budget toward quality and not appearance. Any window will look better than your old windows and fancy attributes can’t keep the home safe and temperature controlled. At least with hurricane windows you get a new, fresh look as well as safety, efficiency, and so much more.

If you are considering hurricane windows in Oakland Park, FL for your home, you are making a smart move for both your house and your family. You have windows in place that will protect your home without you having to install window shutters every time a storm comes through. They are more efficient than other windows and they’ll look great as well. Once you decide that’s the way you want to do, all you have to do is get started on the process with the professionals at High End Impact Windows & Doors. We’re here to help you through every step of the process to make sure you get high quality features as well as top of the line appearance for whatever budget you have set for the process.

Once you set your mind to getting hurricane windows in Lighthouse Point, FL, you might have one large goal—to protect your home from hurricane storms. It makes sense that this goal is automatic, given the name of the windows. But the fact of the weather is that those bad storms only come around so often. The rest of the year, when there isn’t danger of that kind of wreckage, you still have the hurricane windows on your home. You should make other goals for them because there are enough options that what you choose can meet lots of different goals and preferences. Here are some goals to consider, besides protection in the hurricane storms.

You probably recognize that any windows you get for your home are going to be more efficient than what you have now. And hurricane windows are top of the line in that area. They don’t let through hurricane wind, so they aren’t going to let through tiny breezes, either. But even among hurricane windows, there are differences in efficiency. For that, you will want to inspect the labels to see just what you are talking about efficiency-wise before you compare and make a final decision.

If you don’t know a lot about hurricane windows, you might think you get what you get, and the windows will be larger and more clunky. That’s not at all the case. Hurricane windows are so advanced that they are just as sleek and streamlined as any other window. And they have just as many choices. You get to pick between styles, colors, hardware, and other such things to get the look you want. If you have certain appearance goals, you can certainly meet them with the right choices on your hurricane windows. 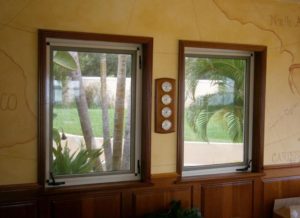 If you know you won’t stay in your home forever, it’s important to consider the resale value of the house when you take on a project this large that will make that big of a difference in the home. While hurricane windows of any kind are going to raise a home’s value, their appearance will make a difference as well. You will also want to think about adding things that are attractive, like picture windows, bay or bow windows, and other such things if you want to raise value even further.

There are more to hurricane windows in Lighthouse Point, FL than simply staving off bad storms, though they will do a very good job of that. When you are looking into options with High End Impact Windows & Doors, it’s important to figure out what your goals are all the way around so you can find windows that match each and every one of them. Then, once they are installed, they will exceed your expectations. The professionals here can help you figure out what direction to take based on what you want and what budget you have to offer the project. We’re here to help every step of the way.

When you get hurricane windows in Deerfield Beach, FL, you might be afraid to make certain changes, like transforming a bank of windows into one larger window. The more glass you have, the easier it is to break, right? That’s not the case with hurricane windows. You get the same protection no matter how larger or small the window might be. If you really want larger windows, and there are a lot of reasons to feel that way, you should go for it. Here are some things larger windows will do for your home.

Living in Florida means you get plenty of sunshine, but you could still have dark areas in your home. That’s not okay! If you want natural lighting, you should have it and larger windows can bring it to any room of the house. The space will look larger, more open, and more welcoming once the larger windows are installed. IT makes sense to worry about too much natural light in this area of the country as well, though. Sunlight can be rather warm if you get too much of it. But if you want big windows, consider low-E coatings on the glass to take care of that problem. This coating reflects heat so the sunlight will come in, but not the heat. You also get no UV ray damage by way of fading furniture and items inside.

Show Off The View

There are more beautiful views in Florida than many other areas of the country and if you are lucky enough to have one of them, you should enjoy it and even show it off when guests are over. When it’s too hot to be outside, you still should get to see what’s around you and larger windows can help with that. You can get tall casement windows or one big bay or bow window to show off as much of the view as you can get.

If you get larger operating windows, you have the benefit of ventilating your home on a nice day with more ease. The larger the window, the larger the breezes can be. And casement windows are especially good for this since the swing out of the house and can catch the fresh air and direct it inside.

These are just a few of the benefits of getting larger options when you are in the market for hurricane windows in Deerfield Beach, FL. Getting new windows gives you the opportunity to at least consider making changes to what you have in your home now. It’s nice to know you are able to shift certain things and improve your home through this project—even more than you would with similar windows in a new model. The professionals at High End Impact Windows & Doors want to hear about your budget, your goals, and even some of your dreams and we will do our best to make all of those fit with certain windows for your home.

There might be times when you have to settle for something less than what you really want due to price or other factors. You might really want stainless steel appliances, but you settled for white. You may really want the lobster dinner when you go out to eat, but you settled for the fish of the day. But when you are in the market for new windows, and you get hurricane window in Deerfield Beach, FL, even if you don’t get any further upgrades on them, it’s certainly not settling. Here are some of the things you get with these windows that show you just how much you aren’t settling.

Energy Efficiency Beyond Other Windows

If you were to get standard windows, they would likely be better in efficiency than the windows that were leaking at your house before. But when you get hurricane windows, they’re going to be even better than standard windows. You know these windows don’t let hurricane winds through. So that means they won’t let small breezes through, either, on a normal day. Their superior energy efficiency will show up on your energy bills quite quickly and you’ll know you didn’t settle even a little bit.

There are two options in this area of the country when storms roll through. You can drag out and install hurricane shutters, or you can have hurricane windows. When you have the windows, there’s no need for extra chores when a storm is predicted to hit. You know the windows are there and ready to get to work whenever needed. They won’t break as debris gets thrown around and that works to your advantage as well during regular days when kids throw a ball or golfers hit a bad shot.

There’s nothing like investing in a project only to know that you will get the money you invested back again someday. It’s easier to make the leap if you know you are raising your home value so when you sell in the future, you will get the money you spent back in a higher home value. Not only will the home be worth more so you can place a higher price on it, but you will also more likely set it faster.

Some people think hurricane windows might look big and clunky on a house, but they are just as sleek and streamlined as other windows. They won’t give the house anything substandard in appearances so you definitely aren’t settling there.

There are lots of options with hurricane windows in Deerfield Beach, FL, just as there are with regular replacement windows. You don’t have to settle for anything you don’t like or don’t want in your house. And with hurricane windows, you get much more in safety and protection as well. That’s certainly not settling. The professionals at High End Impact Windows & Doors are here to help you with the options so you are able to move ahead with confidence.