Hurricane window in Lighthouse Point, FL are made to withstand high winds and impacts. They are able to do a lot of things that other windows can’t. While it makes sense that people in this area of the country are interested in hurricane windows because of the hurricane storms that come through so often, you might be interested to know that there are people in other parts of the country who also like these windows. Why would someone in another area without storms like these care for these windows? Well, some people like the extra protection against intruders since the windows can’t be broken. Other people like the noise reduction the windows provide. But all of them like the energy efficiency the windows bring to the home. That’s one of the biggest reasons people in any area of the country make the switch from regular windows to hurricane windows in the first place and the same can be said around here.

When you think about hurricane windows, it makes sense that they are more efficient than other windows. They won’t let hurricane winds through, no matter how strong they get. But when the regular wind blows? It’s nothing to these windows. They certainly don’t let it through, either. They are golden at keeping air out of a house, which allows you to keep your temperature-controlled air in so it’s not being wasted. That kind of energy efficiency is something you will notice right away once the windows are installed. 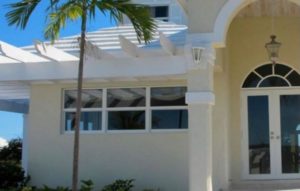 Another big thing homeowners notice is how comfortable the home is. You don’t have to fiddle with the HVAC system and you won’t notice it kicking on and off as often, running itself ragged. The temperature is steady in every room of the house and there are no longer drafts.

The energy bills will be another indication of efficiency. When you get the first bill, it will be much lower than any you’ve had in the past during the same season, and that nice, low price will remain as the months go by. That’s great for summer when you have to run the AC a lot more than usual and for winter when there is a chill in the air you want to ward off with a little heat.

There are lots of reasons to go with hurricane windows in Lighthouse Point, FL, but efficiency is among the top reasons. OF course, people around here want hurricane protection, but hurricanes don’t pop up nearly as often as average days and it’s on those days when the windows shine their brightest by keeping efficiency levels high. IF you want to learn more about hurricane windows and how they operate, both during storms and during average days, the professionals at High End Impact Windows & Doors can help you with those details. We’re here to make sure you understand everything you need to know so you are able to make the right decisions for your home. Call us for a free consultation whenever you are ready.